The art of the game 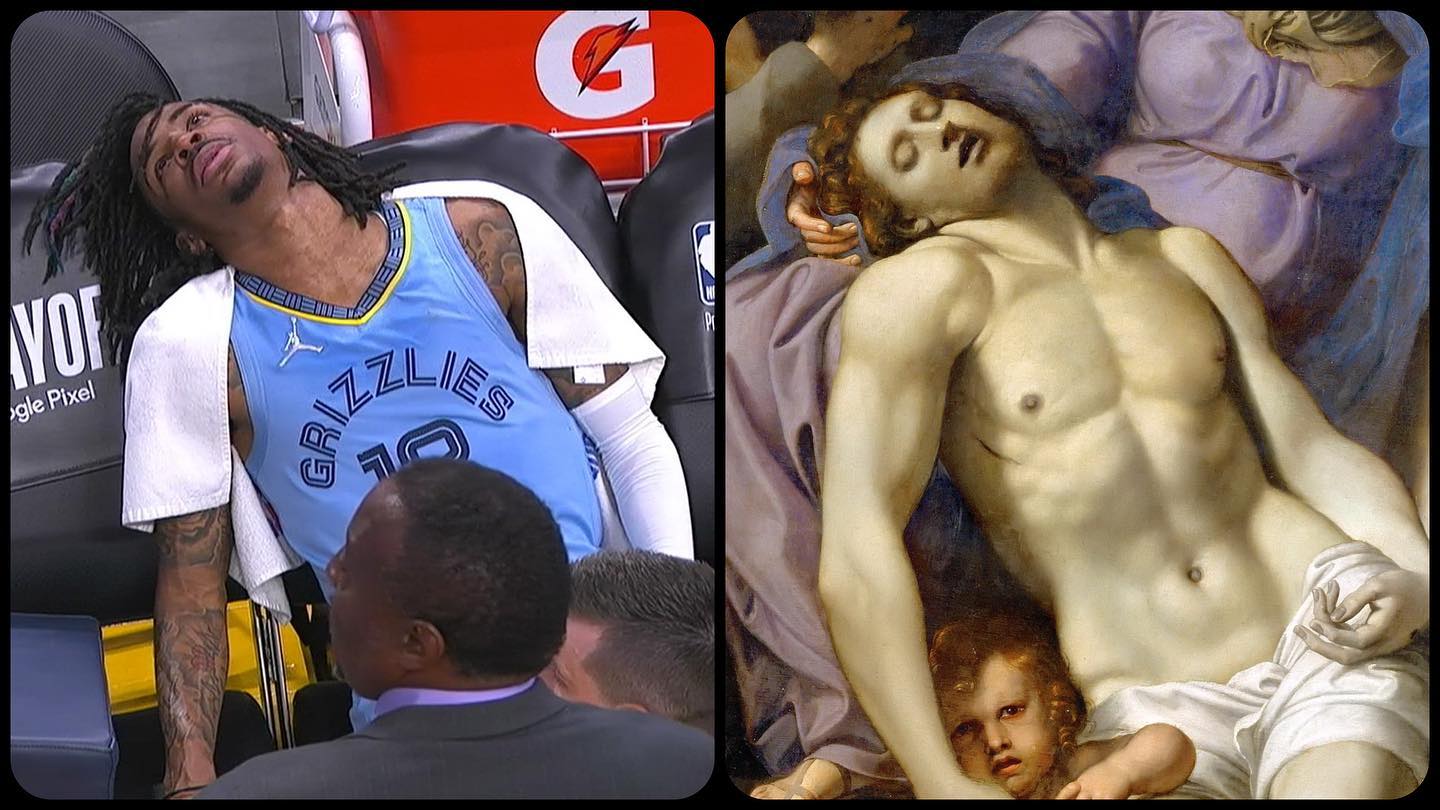 Do sports count as culture? Sure, there’s a culture of sports, but can we consider watching a game a cultural activity? What about playing a game? These are questions my colleagues and I seem to always come back to when designing research to understand cultural “attenders” and “non-attenders.”

As someone whose formative years were equal parts artsy and sporty, the similarities between the two feel pretty intuitive to me. For others, though, it may seem odd to think of an opera company, an art museum, and a baseball stadium as in the same category. But people who go to see live sports deal with the same potential barriers to attendance as with those other, more traditionally “cultural” institutions: high costs, difficulty finding parking, and just the pain of getting there in the first place. It’s just that some of them are more likely to overcome those barriers in a sports context than in a “cultural” one, and that’s where things get interesting.

There’s also the content of the experience. Like the arts, sports are full of drama, grace, violence, and vulnerability. And good sports photographers, often with mere seconds to frame and take their pictures, can capture a whole range of actions and emotions that some artists spend a lifetime learning how to depict.

I think that’s part of why I’ve been so taken lately with the social media account Art But Make It Sports (on Twitter and Instagram). It’s a collection of images from sports set side by side with pieces of visual art, often in ways that feel uncannily similar. So much so that, at first, I assumed there was some AI sorcery behind the pairings. But it turns out it’s just a person, L.J. Rader, with great observational skills and an eye for visual rhyme. Here’s an article about how he started the project, initially with images he took while visiting museums on his travels.

Most of the matches pair gestures or poses, like this one that puts an exasperated Ja Morant (a professional basketball player) next to a pietá by Annibale Carraci (1602-1607):

Or this Biblical “doubting Thomas” paired with players from the U.S. Women’s National Team pleading their case for a foul: 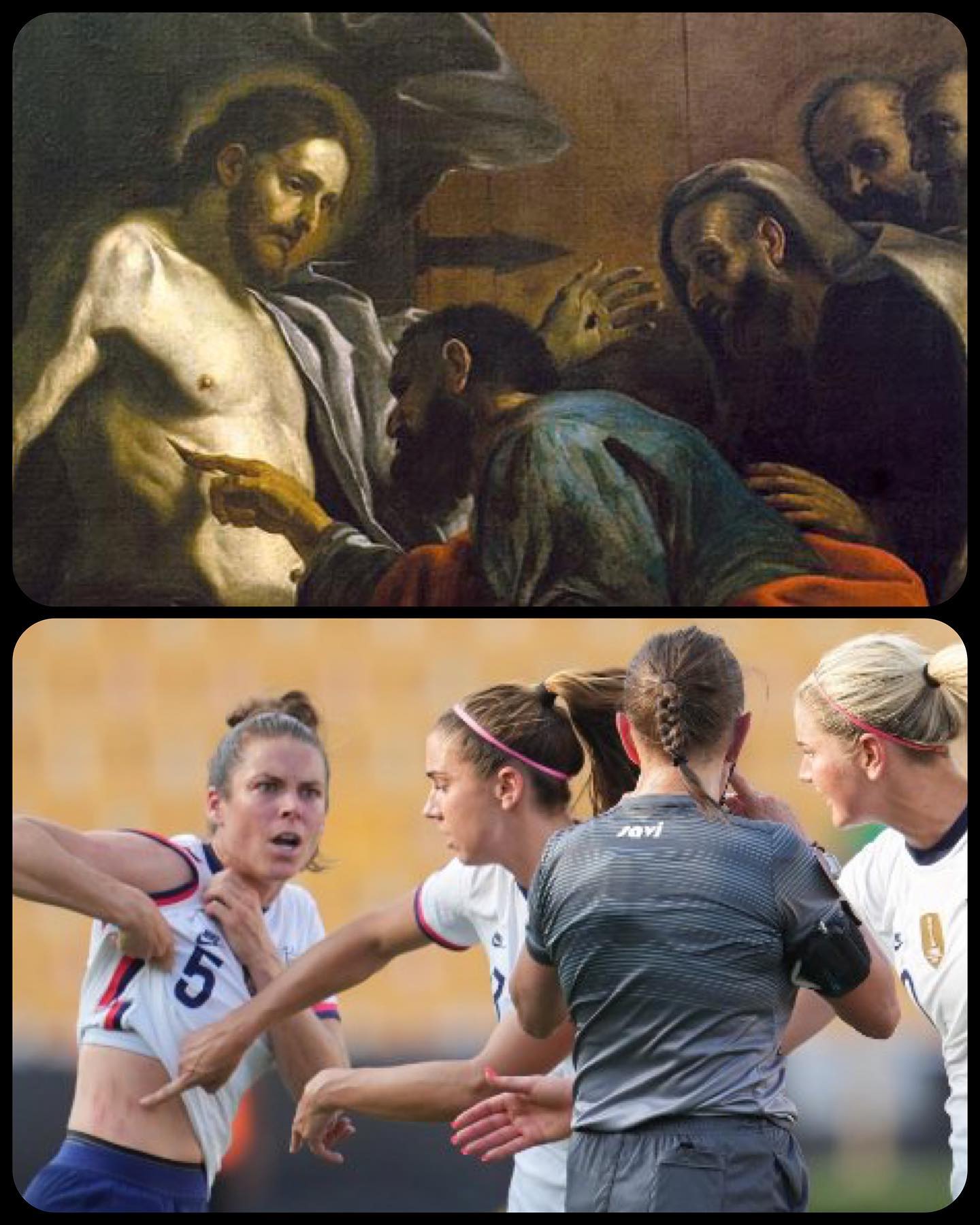 There’s some clever cropping in most of the images, but, still, look at this pairing: 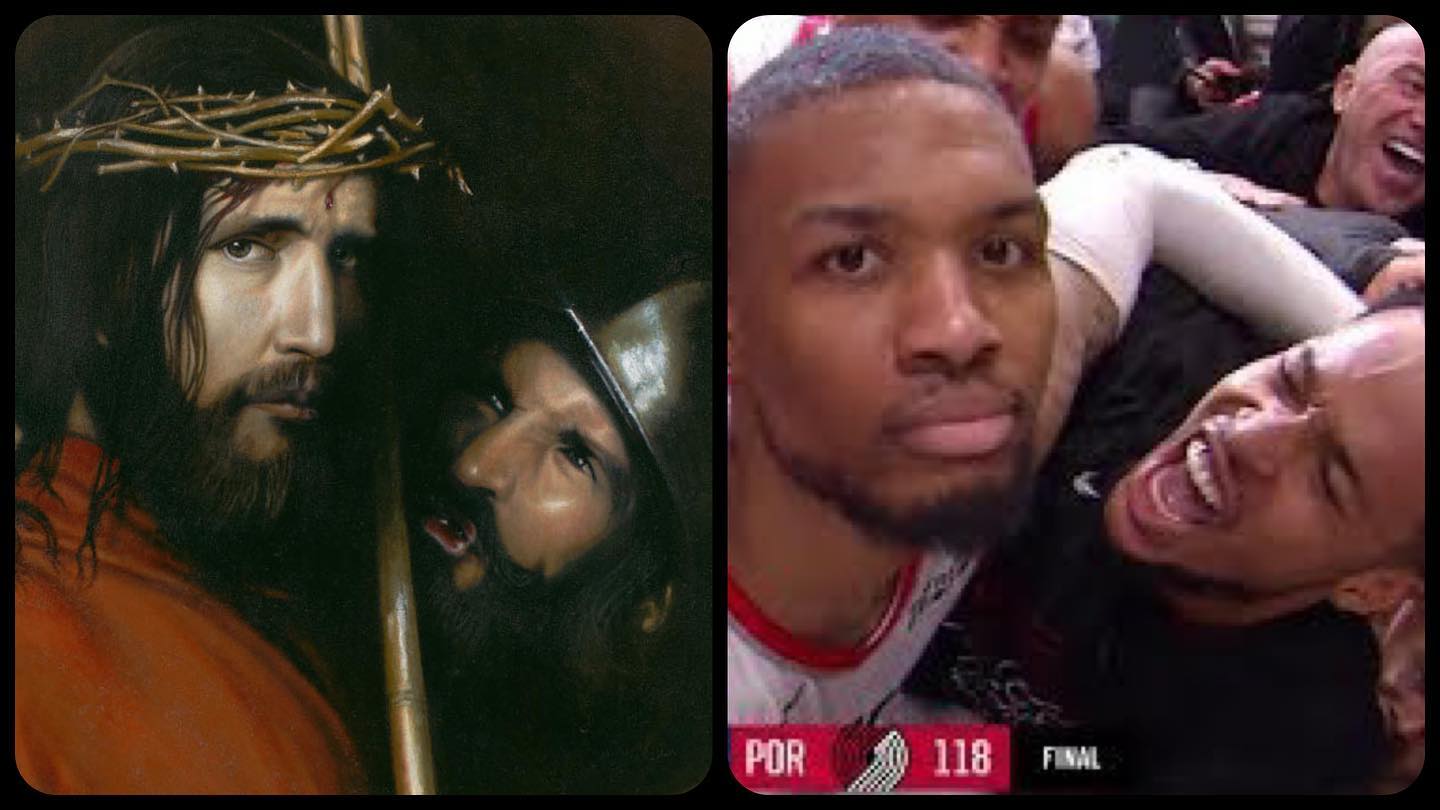 The direct yet impassive gaze of both Jesus and Damian (Lillard), the angle of the interloper’s head and even his contorted expression — it blows my mind every time I see it.

Given that most of the sports photographs Rader juxtaposes are of athletes, there’s a fair amount of figurative artwork on display, much of it with religious iconography. But not always: here’s a more abstract pairing of an overhead view of Michael Jordan mid flight next to a Clyfford Still painting. 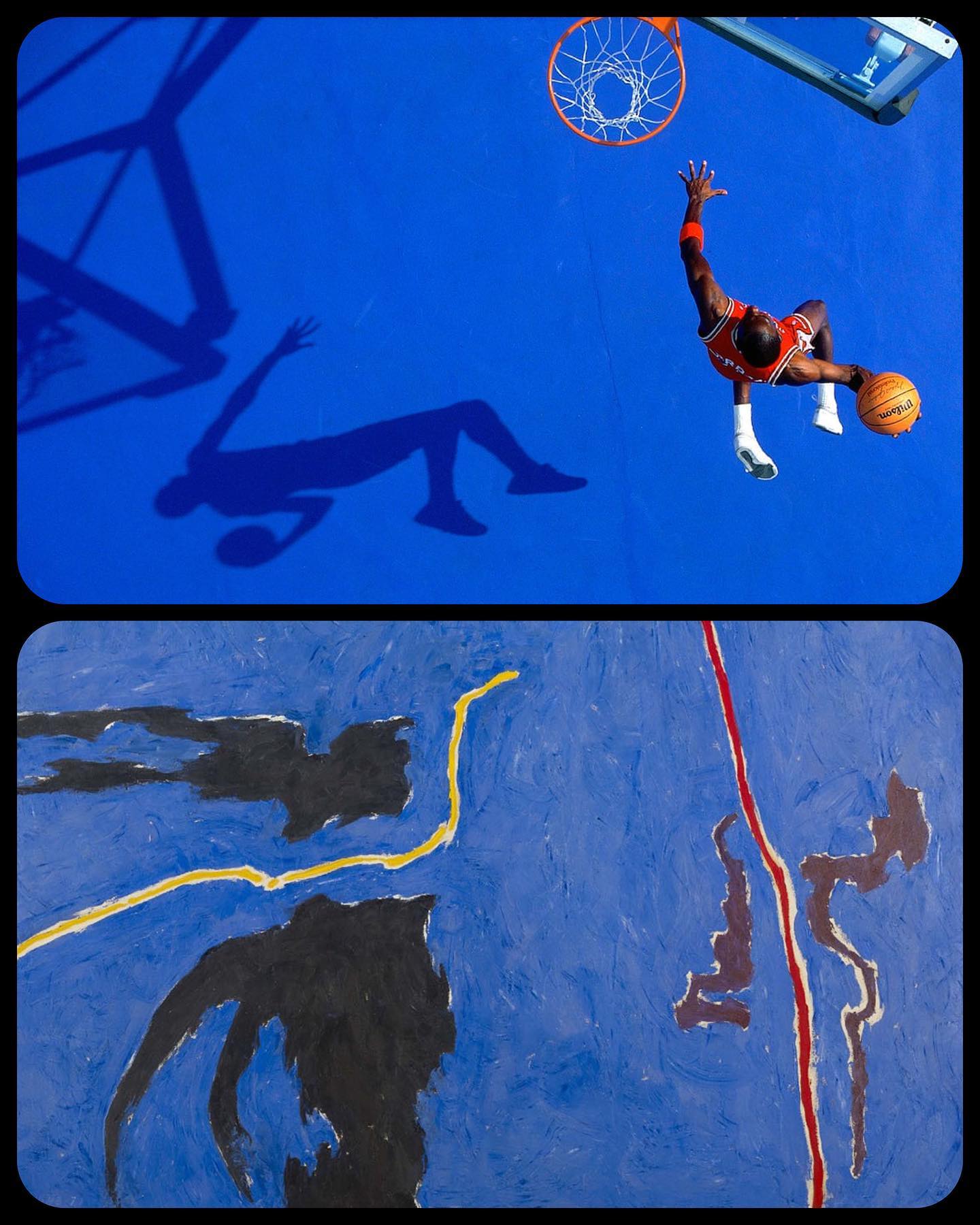 It may not be as perfect a fit as the others, but there’s something about the movement suggested in both that makes them ring true together.

That’s another thing I love about this project: I’m an analogous thinker by nature, and the images Rader chooses often feel like they create a satisfying metaphor, one that illuminates anew both sides of the equation.

For me, the most resonant pairings are ones that speak to each other through multiple mirrorings — of composition, gesture, even style. Take these next images, Van Gogh’s “The Sower (Sower at Sunset)” and a photo of Sue Bird toward the end of her storied career: 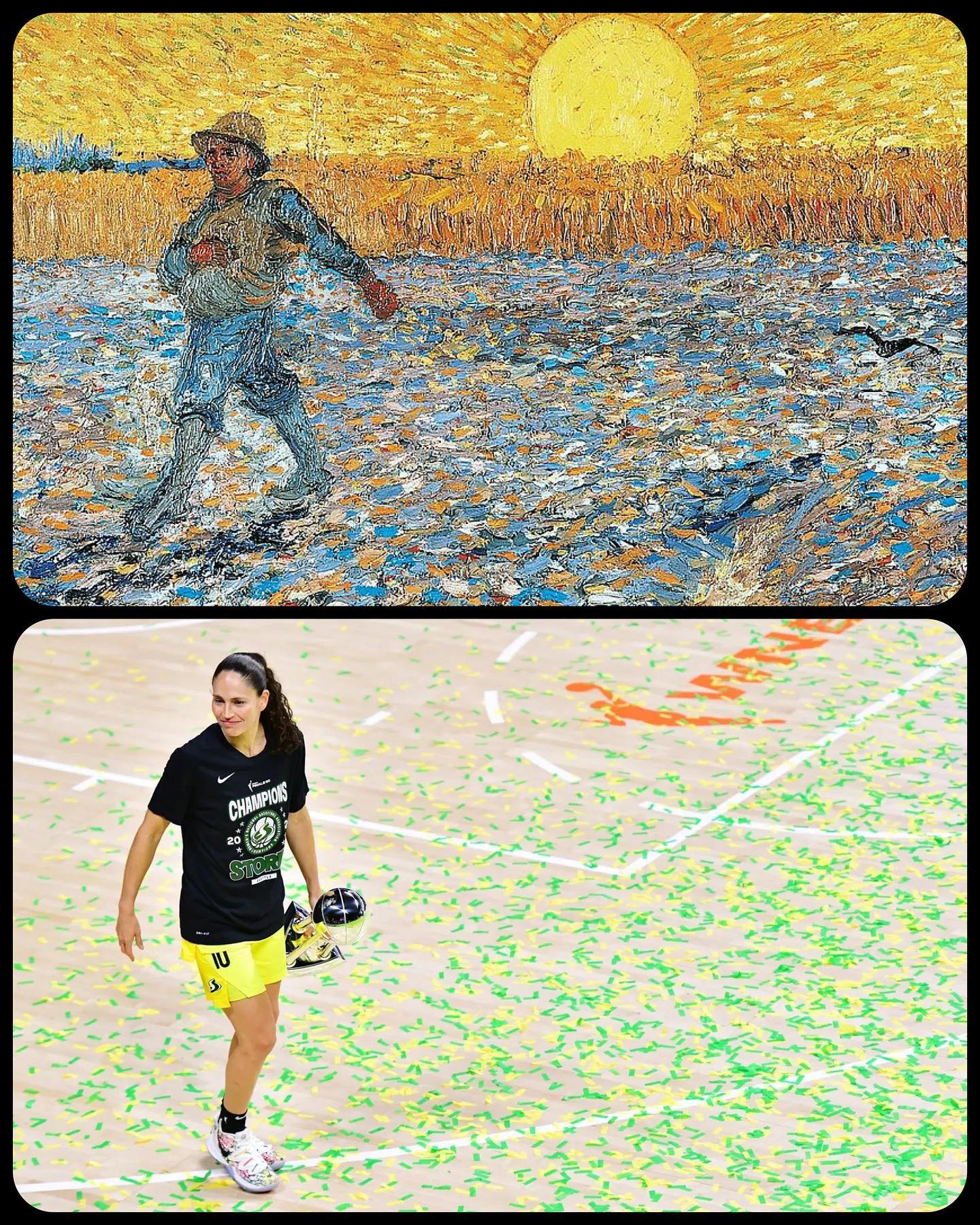 It’s all there: the positions of the figures, the confetti on the floor mimicking the artist’s expressionistic brushstrokes, even the hint of a smile on the sower’s face (or maybe that’s something my eye is adding as a reflection of Bird’s?). But there’s another level of connection: as Rader points out, the sun is setting both physically in the Van Gogh and metaphorically for Bird’s career, and she’s also sowed many seeds of opportunity for future generations of athletes.

There’s joy for me in the shock of these connections snapping together, not unlike what happens with a good joke. Perhaps my favorite of the images takes a nightmarish scene out of a Goya painting and juxtaposes it with the clowning of a college mascot: 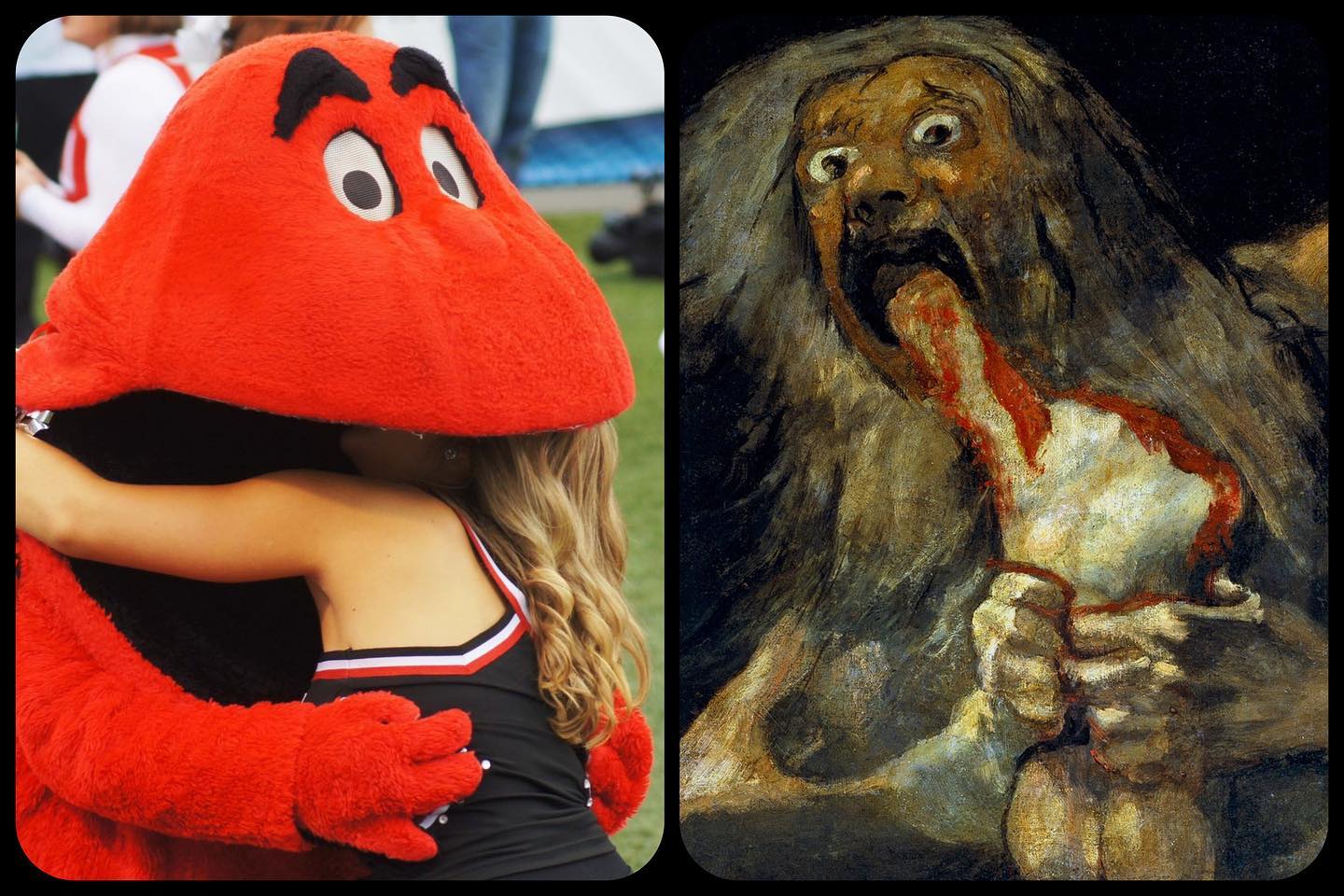 The juxtaposition adds both a bit of menace to the mascot and a touch of dark humor to the titan. I can see how some might balk at treating art in such an irreverent manner. But maybe it’s a good way for those less steeped in art history, and more comfortable on social media than in art museums, to get past the perceived stuffiness of art.

So, are sports culture? For many of us, they offer some of what the arts at their best do: glimpses of the sublime, pathways to emotional investment, and a chance to participate in an active, passionate community — even as players or creators ourselves, sometimes. Of course, the world of sports is riddled with the same systemic issues as other fields, including the cultural sector: racism, misogyny, and abuses of power, to name just a few. But a project like Art But Make It Sports provides a brief respite from all of that, highlighting the grace, creativity, and sheer humanity in both domains. What could be more culturally relevant than that?

Take a look for yourself. I’d love to know what you think! (Email me.)