Curate the crowd, too (6 Ps of Experience Design) 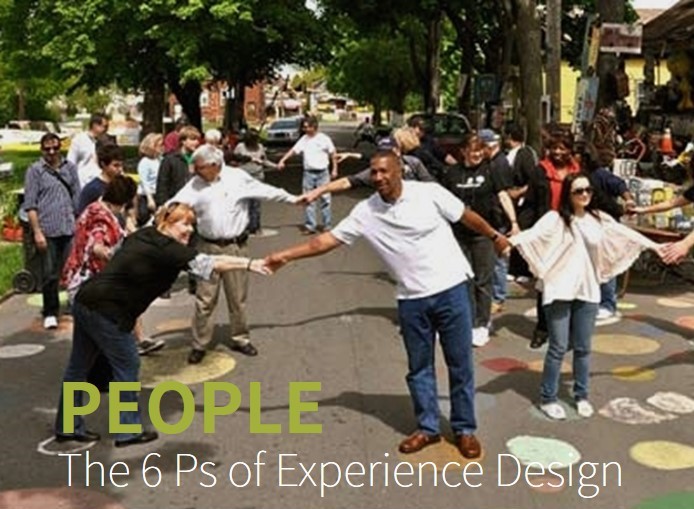 This is the fourth in a series of posts about our new framework for cultural engagement, The 6 Ps of Experience Design. If you haven’t read the preceding posts, you may want to start at the beginning. 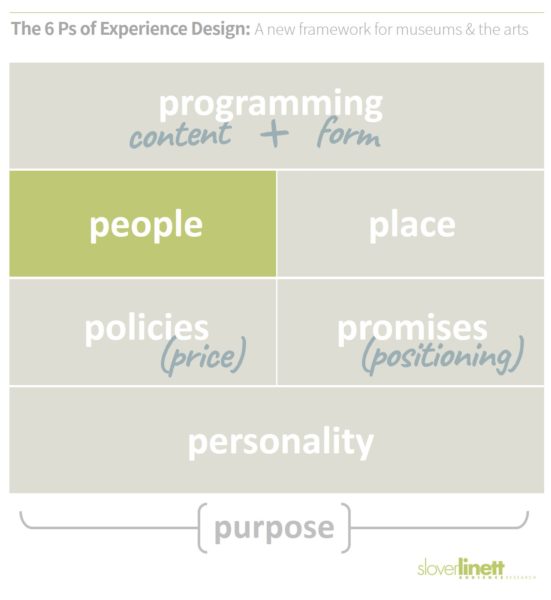 In the previous post, I invited you to think about programming as both what’s presented and how it’s presented — how people encounter, engage with, and connect to that content.

The audience side of the equation is complicated enough on its own, because it’s a circular system: who attends can significantly influence who else attends. That’s one lesson of the audience research we and many other researchers and evaluators have been conducting for years in museums and the arts, and it’s a key theme in the conversations about equity, diversity, and inclusion that have been taking place across the cultural sector. People want to see others like themselves when they attend a performance, event, or exhibition, whether that means “other young people” or “other people of color” or just “other people who aren’t rich.” (They also want to see people like themselves represented onstage or in the exhibition; more about that below.)

And the audience-people P goes beyond demographics; it’s also about attitudes, demeanor, and behavior (see also the policies P). It doesn’t do much good to market a symphony concert to young people as fun, hip, and casual if the actual fellow audience members they encounter are dour, formal, and wearing the same expressions they would wear at a tax-policy seminar. (As I’ve written, classical music’s real audience problem is its current audience.)

All of which means that you can’t just curate the art; you have to curate the crowd, too.

Think of it like a party, with you and your organization as the host. Whom have you invited? Have you given some thought to the mix? What conditions will you set to help everyone feel welcome and relaxed, so they can enjoy each other’s company?

In other words, we need to cultivate a “lateral” view of the cultural experience. Most arts and museum leaders are used to thinking about the relationship between the audience and the content, but few have given as much thought to the relationship between audience members or participants. (The museum innovator Nina Simon has been a brilliant exception to this rule, and she recently recommended a terrific book called The Art of Gathering that’s all about purpose-driven hosting.)

Let’s turn back to that other category of people, those who plan, design, perform, and staff cultural experiences. Some are your full-time colleagues at the organization; others may be independent artists, partners from other institutions, or freelance professionals. All are insiders. But the notion of curating applies here, too.

Much has been said and written about the influence that security staff in art museums, explainers in science centers, and other live human beings have in visitors’ museum experiences. There’s some evidence that visitors who interact with a staff member or volunteer have more positive experiences overall than those who don’t. Yet other visitors feel an oppressive sense of surveillance and control, especially but not solely from security people, which has led to new training and recruitment initiatives.

Less attention has been paid to the equivalent front-line staff in the performing arts, such as ushers and box-office personnel. But every symphony professional knows that audiences have been telling us for years (for instance, in focus groups) how odd it seems to them that the orchestra musicians never smile or even really meet the eyes of audience members.

Culture is a human enterprise. People want connection, and not just with others like themselves. Younger audiences are especially interested in seeing real diversity, on multiple dimensions, both onstage and in the audience. (This is one of the much-discussed findings of LaPlaca Cohen’s most recent Culture Track study.) In those symphony focus groups, they increasingly tell us how disappointing and distancing it is that none (or almost none) of those musicians are Latinx or African American.

The same impulse has led major foundations like Ford, Mellon, Walton, Bloomberg, and others to fund efforts to increase equity and diversity on the staffs and boards of cultural institutions. There’s new emphasis and urgency on the professional-people side of the equation, both because equity and representation are important in themselves and because they’re necessary to achieving inclusion and diversity on the audience-people side. (You can’t just have the latter; authentic external engagement requires authentic internal change.)

Of course, demographic diversity isn’t the only issue. When your people interact with your audience, how empathetic are they? How relatable? Do they make an emotional connection? If knowledge and expertise is what they’re meant to offer, do they carry it lightly or do they lecture? What’s their attitude, body language, and tone? (This foreshadows the sixth P, personality.)

When you start seeing both kinds of people, participants and providers, as crucial elements of experience design, new questions arise and new possibilities open. What do your audiences need in the “people” category in order to have a welcoming, powerful, and relevant cultural experience?

Next, let’s talk about where that experience takes place: the third P, place. Read next post in the series…