Capturing every signal: Why polls matter 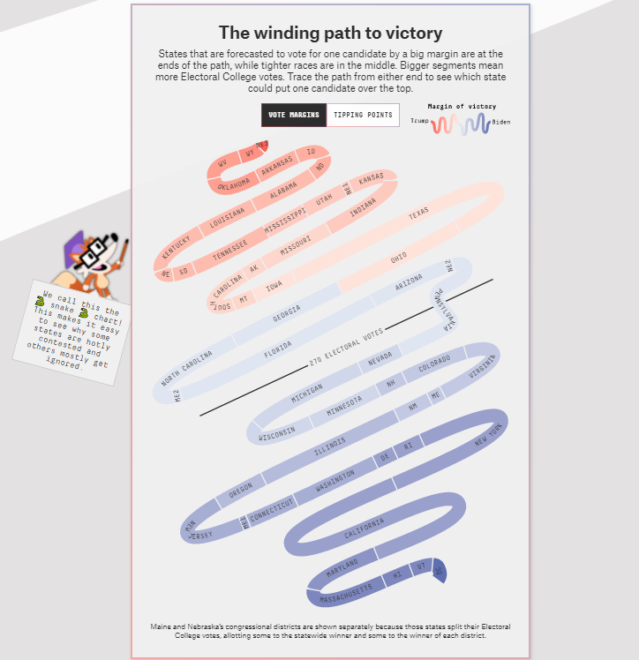 Like many people across the country I am finding myself refreshing the FiveThirtyEight website multiple times a day and squinting to extract as much meaning from the numbers as I can. I love the simple probabilistic topline—Biden wins the election in x out of every 100 scenarios—but I am even more intrigued by the snake chart with every state ordered by probability and a clearly demarcated tipping point.

I spend a lot of time thinking about data. As a psychologist and now a researcher of cultural participation, understanding and predicting human behavior is my passion. I watch the premier statisticians in the election-modeling field the way some people watch elite athletes in their favorite sport. Nate Silver discusses the art of prediction in his book “The Signal and the Noise” using the classic metaphor of the fox and the hedgehog, which originates from a line by the Greek poet Archilochus: “The fox knows many little things, but the hedgehog knows one big thing.” Silver describes how Philip Tetlock, a professor of political science and psychology, studied the cognitive styles of political-science experts and placed them along a continuum between “hedgehogs” and “foxes”.  The hedgehogs are the big-idea people who tend to approach problems from an ideological perspective. They are loathed to relinquish a belief or change their predictions. Foxes, on the other hand, are more facile thinkers who take multiple perspectives into account. Foxes like to gather complex information and refine their thinking based on evidence.

Guess who’s better at making predictions. In fact, the process of social-science research is really the process of the fox: gathering data, examining it carefully, extracting meaning from it, and aggregating it to develop a prediction unencumbered by preconceived notions. When conducting research for cultural organizations, we are rarely trying to predict something with a clean set of categorical outcomes, like voting decisions. Rather, we are trying to model far more complex and internal factors like awareness, perceptions, desires, and identity. The subjectivity that surrounds these kinds of variables makes it all too easy for decision-makers to rely on anecdotes or impressions and can result in very “hedgehog-like” thinking.

So when we conduct quantitative surveys in the cultural field, we bring the “fox-like” approach to prediction.  We make a very deliberate decision to suspend what we think we already know and listen to the audience — to listen for their signals. And, importantly, because surveys give organizations an opportunity to hear from everyone, not just those people who are the most vocal or visible, we try to sample in ways that let organizations hear voices that might never reach them in person, in the lobby or at the opening reception.

Recently, Galen Druke, FiveThirtyEight’s producer and reporter, tweeted a lengthy thread about why polls still matter. He remarked that without polling our conclusions would be formed from our own biases and concludes that “Polling is one of the most open minded and thoughtful ways of listening to our fellow Americans.”

Quantitative data, when gathered with care, can be an important tool for organizations seeking to hear from members of their audience, or potential members, whose voices haven’t traditionally been part of the conversation. Surveys aren’t just a way to find the “signal” in the noise but a way to capture all the signals.

Photo: 538 uses a snakechart to demonstrate the difference between election contests in individual states.