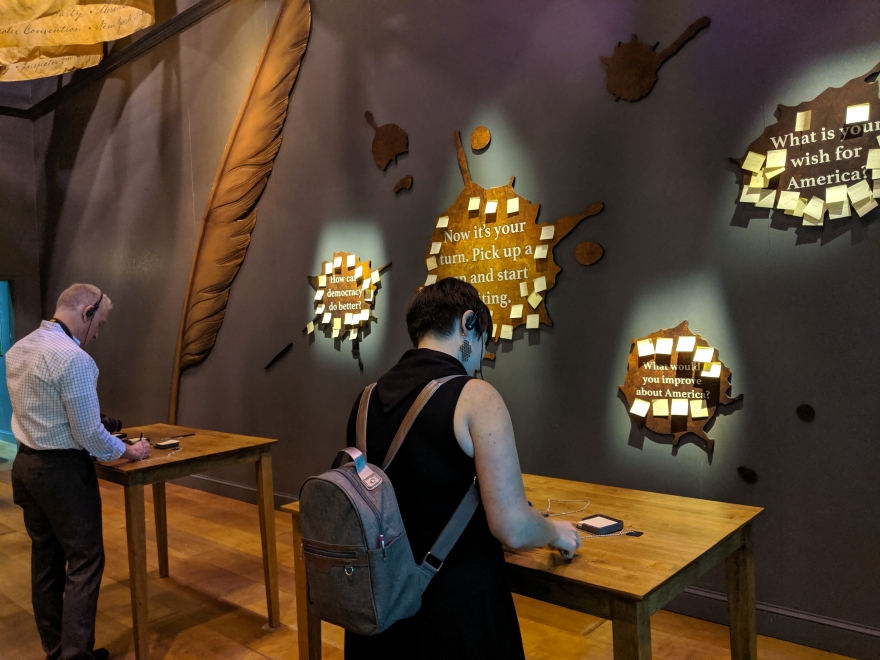 Originally published in the January 2020 issue of Curator: The Museum Journal, Ashley Ann Wolfe reviews the innovative Hamilton Exhibition that was presented in Chicago in 2019, and offers lessons that museums can learn from the exhibition. Preview below, or click here to read the full article.

“I got to be in the room where it happens.

Well, the room where it happened, technically. I’m speaking of Hamilton: The Exhibition, the unexpected, brilliantly designed 35,000- square-foot cultural attraction inspired by the 2015 musical from Pulitzer Prize-winning creator Lin-Manuel Miranda that was presented on Chicago’s Northerly Island from April through August of 2019. I use the vague descriptor “cultural attraction” because HamEx, as it was dubbed by fans and the smart social media team behind the musical, is a bit of an enigma to define. It’s not a museum, though it’s large enough to be one. It’s not a performance, but it certainly is theatrical. And it’s much more content-rich and substantive than those blockbuster-type commercial exhibitions that are presented outside of museums (think of popular installations such as Titanic: The Artifact Expedition at the former Discovery Times Square in New York City). More like history museum meets immersive theater, with a side of travelling circus? Miranda himself struggled with a definition of the exhibition: “I’m still wrestling with the language to describe it… We kept [coming back to], ‘Let’s do what only we can do!’ Which is not put out a thing of artifacts, but create a world that you don’t want to leave” (Di Nunzio, 2019). And that they do. While it may defy traditional definition, HamEx offers many lessons that museums can learn from when it comes to strategically using theatricality and metaphor to connect visitors to an exhibit and deepen audience engagement, particularly when it comes to the display of ephemeral history and culture.”  Read more.

Photo: Visitors contribute thoughts on how to improve America in HamEx’s Legacy gallery. Photo courtesy of the author.

Science Out of the Box: Exec...

What the arts can learn from...